This Saturday April 3rd, I played in my first ever marathon session of gaming. 11:00 AM to 11:00 PM, a full 12 hours of gaming interrupted only briefly to address various gastrointestinal imperatives. I'd heard stories of people embarking on long stretches of adventuring such as this, but having missed out on tabletop gaming as a kid, I never had the opportunity to try it myself. So when the chance came to go the distance on a return to the Caves of Chaos, I grabbed it. 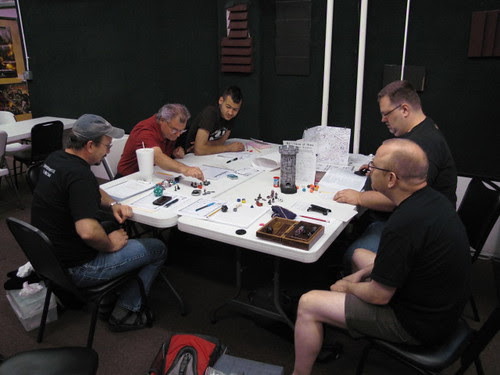 At this point, you should go over to the Troll and Flame blog to read the first part of the game writeup. Norm, who ran the previous Caves of Chaos session, was back in the DM's chair for this game. The first part of this post will address some of the issues/questions he raises.

First off, I did indeed have a great time, in spite of the fact that I had been part of the group that had ravaged these same caves just a few weeks before. Most of that credit goes to Norm and the module itself, as there was enough to do that I never felt we were trodding the same ground. Both groups destroyed the Blue Line Orc tribe, but apart from that, we never duplicated any encounters. I never got bored, and I easily could have kept playing for another hour or two.

I played Mundy the Meatshield, so named because all of my rolls were terribly mundane. Apart from a 7 in Wisdom, everything else was straight down the line average. Later on I also took over Onedias the Mage, who made something of a shift from NPC partner of the group to semi-PC.


"Charm, esp when misinterpreted by DM to work on Owlbears and Minotaurs is really an effective spell."

I'd agree to this statement with respect to the Owlbear. Onedias charming the Owlbear gave us a brute to throw at the Blue Line Orc lair. The beast soaked and dealt damage with equal proficiency, making an otherwise foolhardy frontal assault a sound tactical move. When the Orc tribe was conquered, and the Owlbear had served its purpose, one of the players decided his character hated all monsters, and killed our erstwhile ally. The greedy powergamer in me was aghast at this waste of such a powerful instrument of destruction, but from a game balance standpoint, it was probably for the best. Using one Lucky Charm (tm) as a weapon to defeat all foes would have been a little lame. 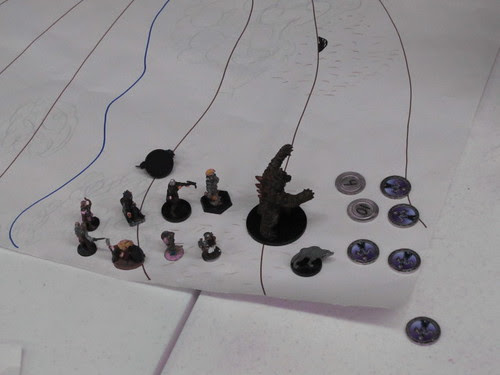 The Minotaur was a different story. The monster charged the party, and did succumb to Onedias' mystic arts, but Onedias would come to regret it. For the minotaur was also a lonely female, and was instantly besotted by the mysterious allure of the mage. Like all lovestruck monsters, she immediately threw him over one shoulder and retreated to her lair to lavish him with her affection. Thankfully, the DM did not make us the players endure these scenes, but when the party finally did rescue the mage, he was almost at his end. Suffice it to say that minotaur tenderness is not like human tenderness.

"Damage by class with more damage if you forgo shield and use a 2h and +1 to hit if you dual wield.  No one ever picked dual wield +1 to hit.  Is it not worth it? Or did I just speed past the description that no one picked up on it."

I tend to favor higher AC characters when I'm playing a fighter. I'm defensively oriented, partly because I think it's more tactically sound to have several highly survivable PCs drawing most of the fire. Foregoing a shield to wield a second weapon only costs you a point of AC to begin. But if you find a magic shield, as I did, then you would be trading 2 pts of AC for 1 pt of To-Hit. Question: if you wield one magic weapon and one normal weapon, how do you know which weapon hit? That makes a difference in the damage done, whether you bypass resistances, and whether you can even hit some monsters. Do you flip a coin? Alternatively, if you are wielding two magical weapons, do you get the bonuses to-hit and/or damage or other effects for both?

If you hold, as I do, that the potential for character death is there to create dramatic tension, then the credible threat of death is sufficient. One need not cycle repeatedly through several characters before the lesson is learned that Bad Things can happen. Even with the Owlbear tank, I never felt my character to be invincible, so I would keep the chart as-is, or make it only mildly more severe.
Posted by Paradigm Traveler at 12:43 PM