Texas gamers! Mark your calendars next year for the 30th annual OwlCon, to be held on the campus of Rice University. This will be the first year I will attend, but I've heard great things about it from Troll and Flame. There's a wide variety of scheduled board games, minis games, tabletop rpgs, and even some larps.
Since I was super-smart and registered early, I got all my first choices:

Most games still have plenty of room, but why chance it? Give yourself an early Christmas present and register today.

Posted by Paradigm Traveler at 8:23 PM No comments:

Over at the Troll and Flame blog, I wrote a guest post in return for the Gaming Aids post Norm wrote for me:

Norm is an avid gamer, an obsessive tinkerer, and a true patron of the tabletop arts. Be sure to check out the rest of his blog, which features a ton of gaming goodness.

Posted by Paradigm Traveler at 8:28 AM No comments: 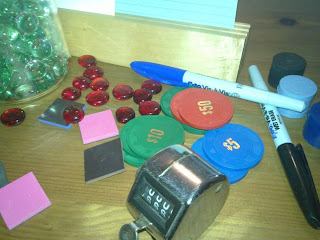 I'm not satisfied with the original array of six character abilities of D&D. I picture ability scores as representing the major, fundamental qualities of a character, and while the original six are serviceable in this regard, they don't perfectly jibe with what I'm going for. Some abilities seem over-broad in what they encompass, whereas others seem somewhat ill-suited for the purpose they serve. In this post, I'm going reexamine ability scores from the ground up, trying to keep the flavor of D&D in mind.

One-shot After-action Analysis #1: Too much information!

Recently I ran an original one-shot adventure for 4 players using D&D 3.5 edition rules. This was the third time I'd ever GM'd a game session, and only the second time I'd run D&D. It was also the first time I'd had more than two players. Was it a success? Well, I at least succeeded in learning a lot about the art of directing a game. In order to ensure this knowledge doesn't slip away, this is the first in a series of posts exploring my lessons learned.

Stats below the jump


Read more »
Posted by Paradigm Traveler at 12:24 AM No comments:

This is the first installment of 3rd level pre-generated characters for a 3.x one-shot. Stats below the jump.

Read more »
Posted by Paradigm Traveler at 11:19 PM No comments:

Ah, there is nothing like the aroma of a cool Spring morning! The crisp air invigorates the body, and the sounds of the songbirds clear away the shadows and cobwebs from a burdened soul! I have always relished greeting the sun as he first peers over the horizon, though it appears that several of my compatriots find more comfort in the embrace of their bedrolls. The only two who are awake, besides myself, are Sir Ravenmantle and Lady Proudfinger. She kneels in prayer, arms raised in supplication towards her God. She spends far more time praising her God and interceding for others than I would think necessary; certainly more than any other novitiate I've known. It seems to work for her, though, and her demeanor can be like a soothing balm after a hard day. Sir Ravenmantle certainly appreciates it. He's supposed to be keeping the final watch of the night for the whole camp, but I suspect were we to fall under attack, his priority would be to protect the holy woman. It's natural, I suppose; I believe they were traveling together before they fell in with the doomed militia.

Hmmm... I should probably be memorizing spells, but my mind is still awhirl with the events of the previous day. So While my friends slumber, I'm glad to take this opportunity resume my account of the yesterday's madness, in hopes that doing so will give rest to my troubled thoughts.

Read more »
Posted by Paradigm Traveler at 9:12 AM No comments:

When HP are not physical damage

Everyone's been there. Your fighter is going toe-to-toe with an orc/ogre/owlbear/whatever. You hack him for 10 HP, he rakes you for 12, you chop at him for 7, he bites you for 3, and on and on. You trade blows back and forth until that magic moment when your hero goes from 1 HP to 0 (or fewer, depending on edition) HP. Last round he was fighting in top physical condition, now he's wormfood.

This rather jarring transition has always bothered me. If HP represents physical integrity or health, then the loss of HP would seem to suggest strongly a concurrent loss of physical capacity of some sort. But that's never the case. Even with systems that use the "death due to massive damage" rule, if you make your save, the character suffers no ill effects. This is unsatisfying to both sides of my brain. The left hemisphere recoils at the idea of a warrior who accumulates vague, unsourced bloodstains on his armor, all the while slashing with gusto, until he just croaks cartoon-style. It's nonsensical. The right hemisphere pipes up that's also booooring.

The problem is that if you get rid of HP, and you go to a more realistic injury system, you're going to be rolling up new characters every other encounter. Not just due to PC death; even relatively minor injuries would realistically sideline an adventurer for days or weeks. It can be fun to play with that level of lethality, and it works well in games such as Call of Cthulhu. In our group's most recent session, an apparition of an elder god clawed at one of our investigators, raking him for 10 of his 12 HP. The guy was able to get off a wild gunshot, but was then down for the count. He survived, but was in the hospital for most of the rest of the game. But usually, particularly for more pulp fantasy games like D&D, I prefer to have more of a chance to know and develop my characters. So we need some kind of buffer between Full Health and Out of Commission.

I've recently been playing Labyrinth Lord using versions of a "Death and Dismemberment" house rule. Other, slightly tweaked variants are here and here. This house rule envisions HP as an abstraction for some combination of stamina, defensive ability, determination, luck etc. When this collective store is exhausted, the character is at 0 HP, and must roll on the table to see what the consequences are:


Each time character at 0 HP takes "damage", he must roll again on the table. This is the best way I've seen to model the fact that until someone takes actual physical damage, they are more or less at full capacity. But once they are injured, things get bad in a hurry, as each further injury brings a chance of disaster.

If you haven't tried gaming this way before, I'd highly recommend it.

New Kids in the Sandbox

Norm over at Troll and Flame asks whether new DMs and new players can handle running or playing in a sandbox style campaign. Having never run a sandbox campaign, I can only speculate how a new DM would fare. Being an ultra-planner, I personally would not feel comfortable DM-ing unless I had done quite a lot of the work ahead of time. This may be due in part to the fact that the only systems I've DMed are D&D 3.5 and Mutants and Masterminds, both of which are on the rules-heavy end of the spectrum.

As a player, I feel that little experience is necessary to enjoy a sandbox campaign. For even the greenest tenderfoot, a short briefing by the DM should suffice. Here's an example: