The old made new again: TARGA and Labyrinth Lord

This week is International Traditional Gaming Week, and in observation, the Austin D&D Meetup group featured a one-shot of the B2 Caves of Chaos module. Our system of choice: Labyrinth Lord, a "retro-clone" of the Dungeons and Dragons Basic Set. 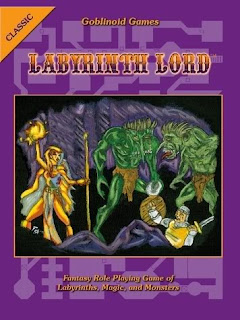 Our group was made up of mostly of old-school players, several of whom had fond memories of B2 from their dusty gaming past, but we also had a couple of players, including myself, who broke into the hobby w/ the later editions. So for me, the anticipation was two-fold: 1st, that I was going to get to play an edition I'd never touched before, and one that has drawn rave reviews from the "Old School Renaissance" (OSR) community. 2nd, in playing B2 itself, I felt almost like I would be undergoing something of a Rite of Passage for gamers, the kind of a shared experience that unites a community of like-minded folk, and gives them a basis for communication.

This was in addition to my typical eagerness for any chance to game. So what did this new-school player think of old-school play? Read on, fellow traveler...

Once we settled in, the first order of the day was character creation. We had our choice of using pre-generated characters made by Norm, the DM, or rolling up our own. If we went the pregen route, we could choose between 1st level Fighters and Demi-humans, 2nd level Clerics, or 3rd level Magic-users. The level advancements were employed to make those wimpy casters a bit more useful. The available stock had been quite well rolled, as far as I could see, and there were far more positive modifiers than negative. Half of our group did in fact take the pre-gens, but the other half rolled our own. Since I was going for the whole shared experience thing, and since it was just a one-shot anyway, I announced to the table I was going to roll up a Dwarf the old fashioned way: 3d6, 6 times, in order. With a feeling of almost giddy excitement, I cast my first dice of the game:

That's right, a total of 4. For Strength. Not a very auspicious beginning, to say the least. Norm noticed, and in a gesture of mercy, gave me the chance to swap that 4 with a roll for a different Ability. I appreciated the offer, but decided that swapping would be tantamount to committing a heresy against the Oracular Power of Dice right out of the gate. I decided to stick with it, and see just how long I could keep this weak-ass character alive. The rest of the rolls were all normal, save a 13 in Wisdom that gave me a +1 modifier. That left me a very weak, but somewhat wise dwarf who was roughly normal in other respects.

From these numbers, my character began to take shape. The low strength was due the advanced age of the character, whose physical power had greatly diminished with the passing years. Time must have also taken a toll on his agility, so it must have been truly great in his prime. He must also have been hale and hearty in his youth, and this vigor, though reduced now, is what enabled him to obtain such seniority. The years have not been wholly unkind to him, though, and have made him the gift of understanding. Being at 1st level, he can't have been adventuring for a living very long, so he must have had another occupation that lasted him most of his previous life; probably one that made use of his great skills.

Obviously, he was formerly a master jeweler, whose skill in cutting gems was well known. Time robbed him of the fine motor skills necessary to maintain his level of work, and indeed, he could now only produce pieces of average quality. Bereft of his passion, yet kept alive by his cursedly good health, he seeks a noble death in the pursuit of liberating treasure from those monsters too stupid to appreciate its true worth.

Thus was born "Wispy", so named for the few long strands of hair that cling stubbornly to his wizened chin and to his spotted pate.

Norm has already posted a game report, so I fortunately don't need to. That leaves me free to concentrate on my impressions as a new player.

First off, the game wasn't nearly as lethal to PCs as I was anticipating. Zero player deaths, whoop! I had fully expected to go through two characters at least, possibly three. The party wasn't completely foolhardy; we did elect to avoid confrontation when the odds were long against us. But we also didn't shy away from a tough fight. And the DM wasn't easy on is, bringing the pain when that's what the dice said. No, we just rolled really, really well on the Death and Dismemberment Table. Over the course of at least 6 throws, not once did anyone roll less than 9. Wispy in particular made sure he would survive the climactic Orc tribe battle by using his d30 roll to finagle an adrenaline surge. Strict adherence to the LL RAW probably would have spelled doom for the party in the initial encounter with the Ogre and the mole men, as "Chuck" and "Shitstain" took quite a beating. Their dice refused to let them fall, though, and bought us enough time to wear the big lug down.

Perhaps multiple PC deaths is a time-honored tradition with old-school games, but in this session, I didn't miss the lack of character continuity. Far from being a downer, I enjoyed figuring out how to make contributions to the group w/ a STR 4 dwarf. It certainly didn't hurt that one of the first things we did when we got some gold was buy better equipment, including a heavy crossbow for the Wispy-nator. The house-rule was a ton of fun, and while less lethal in actual effect, I certainly felt mortal enough.

Second, we didn't face too many traps, and didn't once need to use a 10' pole, but that was largely because we avoided the area of the "dog-men" (which I presume were kobolds). The intel we got from the mole-men indicated that the dog-men had filled their territory with pits and snares of various kinds. Since we knew one tribe of orcs did have a substantial amount of gold, we decided instead to make a beeline for them. We encountered no traps in either orc stronghold, but they nevertheless did have defenses that we could have anticipated. We paid for our inobservance, taking hits from several crossbow bolts fired from concealed arrow-slits.

Third, the whole "player skill vs. character skill" debate deserves it's own series of posts. Even coming from 3.5e, I never played with simple diplomacy, bluff etc. rolls determining the results for social interactions. The actual role-play always formed the basis for the possible outcomes, with the rolls themselves merely making one more likely than the other. I will say that my initial impression is that (relatively) dice-less discussions with NPCs and monsters did seem a little faster paced. Turning to other skills, we did have an opportunity to find a secret door in the mole-men cave, but I simply rolled Wispy's base 2 in 6 chance and came up short. Only later did I think that maybe it would have been different if I had narrated the method of my search, for we knew that a secret door did in fact exist in the general vicinity. Probably not; my roll pretty much guaranteed a failure.

Fourth, pretty much all rolls were explicitly made in the open, so there was no or minimal fudging. If the DM rolled a 20 for the Ogre's attack on the stunned fighter, then that's what he rolled. The only exceptions I noticed were for things like reaction rolls and saving throws, in situations where it was appropriate that the players not know the result. Did the Charm spell work on the Orc chieftain? Well if he bashes you with his club, then probably not. Open rolling and abiding by the dice can sharpen the sense of danger or thrill of relief, but I have to confess that as a player, it rarely crosses my mind that the DM could fudge rolls either way. If it does become obvious that the DM is fudging rolls, I would probably think it pretty lame, but that hasn't happened yet. Or maybe I'm just too innocent and trusting.

Lastly, combat itself wasn't conducted in the stately procession of steps the way it's described in LL. We used a more free-flowing, everything-happens-at-once system. It took a bit of getting used to, particularly because most of our players are accustomed to playing with segmented rounds. For this game, we basically all told the DM what our character intended to do. He mentally organized those actions and those of the monsters into a coherent sequence, then began narrating the scene, with all of us rolling dice as needed. It was going pretty smoothly by the end, and with an experienced group, I expect encounters would have a very cinematic quality. I don't know that this was old-school, but it at least fit my ill-informed concept of old-school play.

A great time was had by all. I would definitely play LL again, with or without the house rules. So far, in my estimation the differences between the editions of D&D, from Basic/LL up to 3.5ed, are differences of degree rather than of kind.
Posted by Paradigm Traveler at 2:34 PM